I had the pleasure of listening to Prof Adam Grant talking to a packed house at Action for Happiness in London last night. He covered much, and time seemed to fly by, in his two hour lecture but I thought I would share a few of the points that particularly struck me: 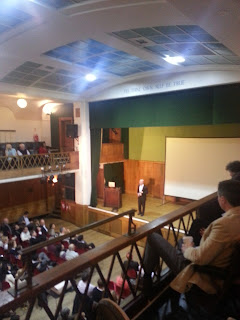 He discussed the idea of there being three mindsets we can take on,

Givers – who look at how they can help/give to others

Takers – who look at how they can get the most from others. This is the commonest group.

Matchers – who look at how they can ‘trade’ evenly with others

He found if you looked at how successful people are in terms of grades, productivity, or sales the bottom of the successful list was consistently more populated by givers. It seemed they spent more of their time helping other people out than working on their own projects, and as salesman wanted the best for their clients, which included not selling them things they didn’t want.

This seems that bad news for the givers.

So which type was most represented top section of ‘the most successful people’ list?

Strangely enough it wasn’t ‘the takers’.

Nor was it ‘the matchers’

Again it was ‘the givers’: this group was most represented both in the most and least successful groups. This strange result seemed to be partially related to time, givers took the time to build relationships with people so that their customers and colleagues trusted them, they also were interested enough in their customers to discover their true needs.

Relationships built on these ideas tend to be more fruitful in the long-term.

Linked to this was the idea of weak and strong ties. Our close friendships are considered to be strong ties, whereas ‘acquaintances’ are weak ties.

It turns out that when we are starting a new project, looking for a new job or want assistance or advice from other people, that are strong ties are the least useful. We’ve often used their connections and networks and advice in the past and to some extent they are now redundant.

The weak ties seem to be more useful at providing new insights and opportunities. The takers burn up their relationships having used friendships without giving anything back; givers have much greater networks and the magic ingredient of ‘dormant ties’. These are people who you haven’t been in touch with for a while, but when you do reconnect they remember you fondly and are keen to help you; remember most of the world is apparently made up of ‘matchers’.

Dormant ties are even more valuable with new projects than weak or strong ties, they can often put you in touch with new opportunities and new possibilities; and naturally givers have many more dormant ties than takers.

Take some time today to consider where you can give more, not in order to get something… Just as a gift.

Also consider who is a dormant tie you have not been in touch with for a while who might be an interesting person to get in touch with about your current project.

Then of course email them, tell them what you are up to and ask if they can help. This final phase is very important, as givers tend to not be good at asking for assistance. If this applies to you maybe think of it instead as giving your dormant tie friend a chance to give.

And see what magic unfolds…